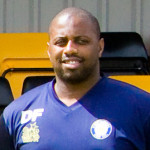 As this was one of the biggest games in the club’s history I had mixed emotions about it all.  On the one hand I was nervous, as I wanted the players to show how much they have developed as a team and as individuals.  The other side was a strange emotion of joy and feeling very proud of my achievements of the last two and a half years.

In my few years at the club I have experienced many highs and lows and the moment we found out we were playing Birmingham City FC was a moment full of joy and happiness; as it was the day that Birmingham City FC became my employer once again.  How strange, but amazing that was.  A couple of minutes after receiving a call from Birmingham City FC’s Academy Manager, informing me that I had just earned myself a job at the academy, came the call from Continental Star’s chairman: Keith John, letting me know the draw for the next round of the Birmingham Senior Cup.
It was great to test myself and my players up against some the best players and coaches in the country.  The players did the club and myself proud with a great performance matching the professional footballers with their football at times, and the score line wasn’t a true reflection of the game. It was a reflection of the quality of forward players Blues had in their young team.

The night left me feeling proud of how far the club has come, and made me reflect on all the hard work put in by everyone behind the scenes, to ensure that we are in a position to play in such prestigious cup competition.  At the end of the game I was left full of emotion, as I could see in the people’s eyes the look of pride and approval of the level of performance shown by the team.  That performance was for Lincoln Moses, Keith John, Deno, Diane, Gary, Earl and all the other volunteers who have given the club the support it has always needed.