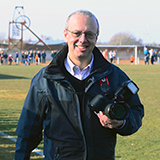 David is not just any ordinary fan of the game, but he is a campaigner for non league: ‘grass-roots football’.

“On the official website of the Football Association, there is a tab named ‘Community’. Click on it and you will be transported to various links detailing the work that governing body for English football carries out for the benefit of grassroots football communities nationwide. Charter Standard; Community Awards; Community Football Day; the McDonald’s Kit Scheme … it’s all there. Similarly the Premier League’s ‘Communities’ Report for 2014-15 is full to bursting with statistics detailing its commitment to local communities. In that period alone it states, over half a million young people were supported via projects directly funded by the Premier League. There is also an emphasis, if the photographs within are any indication, of a strong focus on ethnic minorities.

It’s all very laudable, taken at face value, and there is no doubt that many do benefit from such initiatives and funding. Many grassroots clubs have, and continue to benefit from strong links with their local professional clubs, who are engaging with their local communities, including some that have been doing so quietly in the background for quite a while now. Equally however, many would argue that it merely scratches the surface, and view such glossy pamphlets and websites as mere PR. A £10.5m three year investment in school sport for example, is relatively insignificant when one considers the TV rights paid by broadcasters for Premier League matches; transfer fees being paid for some players, and the wages they are commanding. Often there are strings attached, and non-League clubs find themselves competing with local councils, schools, and leisure centres; as well as other football clubs. Red tape, and the requirement to meet funding or to pay for surveys and consultancy fees can prevent a club from even making an application. Many simply don’t have the money or the wherewithal to raise it.”  ‘Race Relations’ by David Bauckham 2015

Click the photograph to read David Bauckham’s article in full.