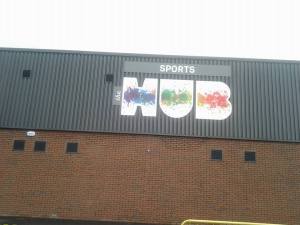 So what happens if like-minded people from different sporting disciplines come together?  The Sports Hub.  The Sports Hub was the brain child of Continental Star’s Lincoln Moses MBE.  Having been at the forefront of a search for a permanent home for Continental Star FC for over two decades, Moses never gave up hope that they would one day find a place that they could call home.

The charismatic Moses formed his own company, Brother’s Keeper, after being made redundant in the mid 90’s.  Moses quickly turned the disappointment of being out of work for the first time in his life into an opportunity to push ahead, fulltime, with his passion to make a difference within the community.   Moses recalls that “…I was being invited to attend meetings and as a result of attending one meeting I was invited along to another…often times I would see the same people attending the meetings, just ‘Networking’… ”  It was during his time networking at the various meetings that he soon came to realise that as an individual ‘voluntary group’ the odds would always be stacked up against them.  Moses stated: “…unity is strength…I was always looking out for people that I could work with, or go into partnership with.”

Several years down the line, and countless meetings later, The Sports Hub, at Holford Drive stands as testimony of what can be achieved when individual voluntary groups come together under a shared vision.  The Sports Hub is now the proud home to Aston Boxing Club, Broadway School, Continental Star Football Club, Holford Drive Tennis Club and newly formed Continental Cricket Club.

Today, less than a year after its opening, The Sports Hub a.k.a The Hub is flourishing, regularly engaging over 700 young people a week in various sporting activities.  Not only is The Hub providing sporting activities for those in the community, but it has also held several governing body coaching courses; put on a football Summer School and hosted some non-traditional sporting tournaments which have attracted participants from as far afield as London.

Lincoln Moses received an MBE for his endeavours to grassroots football, and if you spend some time in his company it is not difficult to see why.  Moses is passionate about The Hub and the potential that it possesses.  But even more so, Moses sees The Hub as being a blueprint for others “…this is an example of what can be achieved within a community when genuine community groups are entrusted…with funds…”

There appears to be very little danger of those in charge of The Sports Hub sitting on their laurels, as there are already plans underway to include other sports.