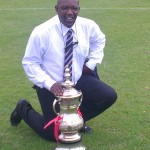 Today’s game saw CSFC travel to Shropshire to face Shawbury United FC in a FA Cup extra preliminary round game.  Once again Star started off very slow, failing to string together any passes; we didn’t manage to attack the opposition in our normal fluid way.

It wasn’t long before our poor start was punished.  In the 9th minute the Shawbury Utd right-back swung in a cross that landed at the feet of their number 8, who calmly hit the ball into the bottom right hand corner of Jordan Ellis’ goal mouth.  Despite conceding we still didn’t pick our game up and the frustration was shown just before the half hour mark when CSFC central midfielder, Aaron Evans failed to control the ball and jumped into an unnecessary challenge on the edge of the opposition’s box; the challenge was so bad that the referee had no other option than to show him a straight red.

Star finally picked up their game after the sending off (and the subsequent delay for the treatment to the injured player).  We managed to begin to attack the Shawbury defence, as we kept pressing and pressing.  This pressure finally paid off; good wide play from left-back, Anton Caines-Powell, ended with a low driven cross that was met by centre forward, Danico Johnson, whose first time shot rebounded off the keeper and into the path of Ricardo Swaby, who slid in and equalised on the stroke of Half Time.

We started the 2nd half positively dominating the game playing from right to left and creating good opportunities to grab the lead.  However, Shawbury, with a full complement of players were satisfied to sit back and try and hit us on the counter.

Star had a very good chance half way through the 2nd half when left back Anton Caines-Powell played a one two on the edge of the box with wide man Garfield Robinson and again Caines-Powell drove a low cross right through the six yard box that nobody in a Star’s shirt gambled on.  Star would regret their missed chances as they were punished 5 minutes from time, when Star’s defenders Tom Hurdman and Ruben Wilson were left 2 on 2 at the back and a low cross was latched onto by their number 10 (who looked yards offside); he calmly scored with a clinical finish.