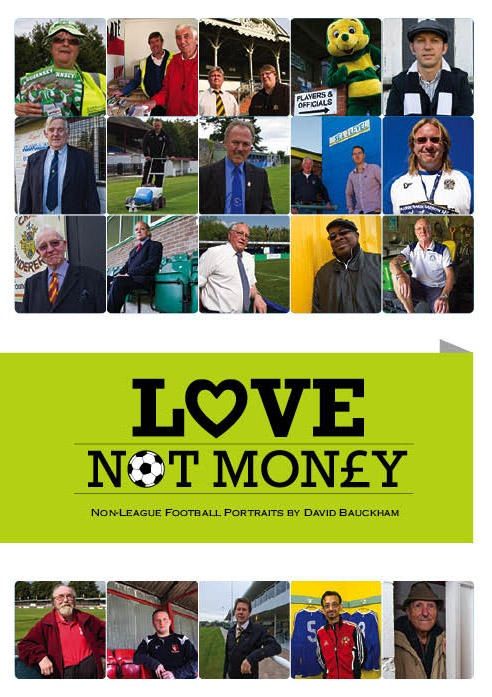 Award winning photographer, David Bauckham has been travelling the length and breadth of the country photographing and interviewing hundreds of volunteers who help to run the various non-league football clubs.  His long awaited book is now available and our General Manager, Lincoln Moses MBE has made the front covers of the book: ‘Love Not Money.’

For further details about the book, visit: http://www.centrecirclepub.co.uk/

Below is David Bauckham’s article following his visit to watch Continental Star, on their way to winning the Midland Combination Premier Division title 2011/12.

Award winning Writer and photographer David Bauckham has been on his travels again, this time to the West Midlands to meet the Caribbean team Continental Star, a football club that is also registered as Charity and works as a social enterprise.

When one follows non-League football it’s quite common to encounter clubs with unusual names and to be sufficiently intrigued to want to find out more. However, it’s even more intriguing to search for a club website and be greeted by the sound of Bob Marley and the Wailers. Thus began my interest in Continental Star. Marley may be gone now, both literally and from the website, but the club continues to thrive in its own quite unique way.
Continental Star FC was formed on Villa Road in Handsworth, Birmingham in 1973 as Villa Star FC but within two years however, the name was changed to reflect the demographic of its players, drawn from throughout the Caribbean islands. It is however, much more than a football club and indeed, General Manager Lincoln Moses who first arrived as a player in 1979 and was subsequently Secretary and Manager, suggests that ‘Family Club’ is in fact more representative of the initials F and C. In 2009 Moses was awarded the MBE in recognition of his services to Grassroots Football, but although arguably the club ‘figurehead’ he is just one of many who have given many years of service to the club. Chairman Keith John for example is now in his 34th season, having also joined as a player initially before taking on Secretarial and Managerial responsibilities.

Today Continental Star is a Social Enterprise and Registered Charity that seeks to help those within the local community that are often marginalised and considered by others as hard to reach. Moses, who took redundancy due to ill health in 2005, says: “I work 24/7 because this is what I do; everything I do is linked to Continental Star”. Despite success on the pitch (the first team currently leads the Midland Football Combination), Moses is clear that football is only part of what Continental Star is about: “Everything we do on the pitch has got to be equal to what we do off it. A lot of these youngsters haven’t got much chance in life of doing anything but once we give them some form of identity and belonging, we find that we can change their lives around; not all of them, but the majority of them.” He adds: “Some of the youngsters we have on board now and before are very challenging and deemed by society to be hard to engage with but we don’t seem to have so much of a problem. We’ve become, more or less not only managers and mentors, but surrogate fathers, bank managers, social workers and everything else.”

Trustee and Committee Member Gary Christie, a local PE teacher who became the club’s first Youth Team manager, is another to have “bought into the dream”. Since first getting involved in 1998, Christie has since brought a lot of youngsters from school that were marginalised, and danger of being excluded. Like Moses he stresses that the aim of the club extends far beyond football, something of which he is justifiably proud: “We’re getting people back into education, training or employment whereas before, that wasn’t happening.” “We have kids now that have gone on to university who prior to being involved with the club wouldn’t have been doing that.”

As well as running no fewer than 15 teams including girls and ladies sides, there is also a successful after-school Homework Club which targets disadvantaged Young People and a women’s help group providing valuable support and advice to the unemployed and lone parents. The club also acts as Grassroots Black & Asians Minority Ethnic advisors to the FA and ‘Kick It Out’. In addition, the Continental Star Academy is a partnership between the Club and local education/training service providers, and under its umbrella exist a range of discrete activities run by the club which use sport as a vehicle to deliver educational and vocational improvement activities distinct from the general playing teams of the football club. This includes the ‘Second Strike’ initiative that specifically targets young people that have been excluded from school or are at risk of exclusion, providing a programme of structured vocational and sports coaching training that leads to either a return into formal further education or indeed a potential career in sports coaching. The younger students find role models and mentors within the older peer group that assists in their development and builds self-esteem. Meanwhile the older students benefit from the increased responsibility of helping and guiding their younger colleagues. The dynamics of this situation produce positive outcomes for all students.
Obviously the initial catalyst for drawing any youngster into the club is not education but football and the dream of a professional career. Over the years Continental Star has fostered strong links with local professional clubs such as Birmingham City and further afield at Notts County. Moses and others currently act as inner city scouts for West Bromwich Albion and a number of younger players have earned trials. Moses estimates that around eight seniors have gone on to play at Conference level with another earning a contract at Burton Albion. Not bad for a club whose first team currently competes at Step 6 of the non-League pyramid. Although there is no money involved, the club receives kits, balls and equipment from WBA in return.

Funding however, remains a perennial problem for a club that has never had a home ground to call its own and has been forced to lead a nomadic existence since its formation, relying in excess of twenty ground-sharing arrangements over the years. ‘Home’ is currently Rushall Olympic’s Dale Road ground. Earl John is another who has been involved almost from the club’s inception and feels that a sound financial infrastructure, including a home ground, is the key to further development: “If you have a base you can access funding to build a resource centre and do the mentoring and run the after school club from there. As it is we are paying a five figure sum each year to enable players to play at this level, and the cost of ground-sharing is almost unsustainable.”
John adds that over the years it has been “almost second nature” for club officials to help fund the club out of their own pockets but that has become increasingly difficult in the current financial climate and with their own children making demands on their resources. Nevertheless, like everyone else at the club he sees no option but to carry on regardless: “How do you disband something like this? You simply can’t, so we have to find the funding from somewhere. We’ll just carry on and hopefully something will break.”