Today saw Stars take on Fairfield Villa at home in a must win game if we wanted to keep our chances alive of winning the league.
We got out of the blocks very slow as we were second to every ball and not really competing with the opposition. Unfortunately we went 1 nil down from a great goal by the opposition, skipping past two players and rifling the ball into the bottom corner from the edge of the box. This gave us the wake up call we needed and we were quick to respond. Within 5 minutes of us re starting the game Josh Nelson played a superb through ball to Devonte who finished well under pressure and got us our equaliser. We carried on applying pressure but went behind again from a set piece. A corner came in and a push on our keeper made him drop the ball and their attacker to put the ball into an empty net.
We went into the dressing room 2-1 down but knew we wasn’t out of the game!
With a strong team talk from Daniel & Deno we scored two quick fire goals in the second half. The first with Devonte dribbling past 2 players with his fast feet and passing the ball off to Nelson to take it out of his feet and unleash a 25 yard wonder strike into the back of the net! (Goal of the season contender?) The equaliser gave us confidence to carry on playing our attractive football and we got our rewards as Nelson fired another long ranger at the keeper only for him to parry it out and and Josh Robinson to follow up and cooly put it over the Fairfield keeper. As we had this 3-2 lead we didn’t look like throwing the game away and the scoreline flattered Fairfield as we missed late chances.
Final Score: Continental Star Reserves 3-2 Fairfield Villa Reserves.

Great 3 points for Stars. Hopefully we can carry our performance into the next game away to Brocton on the 7th Feb. 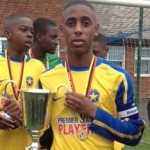