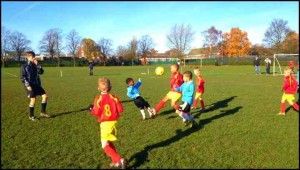 Continental Under 8’s had a fantastic weekend. They trained hard on the Saturday learning about positioning and mental attitude.  Learning about P.E.T.S (Passing, Encouraging, Trust & Support).

They have taken all that they have learned into their matches.  The Under 8s won their 1st game with a hard fought 1-0 win.  They kept it tight at the back only allowing their opponents one shot on goal.  The under 8s displayed superb passing and excellent movement off the ball. A match they definitely deserved to win.

In the second game they overwhelmed their opponents with a full attacking attitude. The opponent’s goal keeper was the difference between the two teams; he definitely kept his team in the game as they resisted Continental’s pressure.  The game ended 0 – 0 which did not reflect the true pattern of the game’s play.

This is the 1st time our boys have not conceded a goal in both games. We can see that they are improving each week with a desire to learn and improve.  Last weekend, was a great day for Continental’s under 8’s, they deserve the credit they receive. Well done boys.