Following Tuesday night’s heroics in the Birmingham Senior Cup, Star returned to league action, making the short journey to the Tipton Sports Academy, to face Tipton Town in this Midland Football Alliance clash.  With a poor pitch and very windy conditions both sides found it hard to establish a passing and moving game.  The host settled quickest; on 25 minutes Tipton striker Nigel Penney saw his shot cleared off the line and away for a corner by Matt Hunt.  Skipper Tom Tonks played a quick short corner to Mitch Plows who whipped a ball into the Star box allowing Lewis Haycock to rise above the Star defence with a powerful goal bound effort, but the quick reactions of Gavin Ellis, in goals for Star, tipped the ball onto the crossbar, only to see the ball bounced back off the crossbar and into play.  Striker Karl Edwards was quickest to react, but screwed his header wide of the target, a dreadful miss.  Star attempted to get there trademark slick one touch football going but the pitch and a wall of Tipton players wouldn’t allow it.

In the 34th minute, only the finger tips of Ellis prevented Town taking the lead when he superbly tipped a close range header over the crossbar from Haycock, following a Penney cross.  Town’s pressure finally paid off 4 minutes later when a long ball into the Star box by Phows wasn’t dealt with by the Star defence, allowing Edwards to hit a scuffed shot into the bottom left hand corner of the net under the body of the diving Ellis.  Things got worse for the visitors, on the stroke of half time when keeper Ellis called for and came to collect a routine cross from Tonks, but before he could get there he found himself out jumped by Richard Huckfield, who headed the ball over Ellis and into the net; a bad error of judgement by the Star keeper

The second half saw Star come out fighting and pushing Town back into their own half but after creating a few half chances, on the hour mark, Star were hit with a real sucker punch with Huckfield scoring his second of the match; he rose unmarked from a Tonks’ corner to head the ball into the bottom left hand corner of the net, a very sloppy goal to give away.  Despite being three down Star never gave up and kept on fighting; in the 71st minute, skipper Davion Hamilton saw his shot from the edge of the area sail inches over the Town crossbar.  And on 83 minutes, Hamilton stung the palms of Jack Hayfield in the Town goal when he palmed away a fierce goal bound shot, for a corner.

Star continued to press and with Town looking like the side three goals down hitting the ball anywhere, wanting the final whistle to be blown; the final kick of the game saw Town awarded a free kick 25 yards out, and central to the Star goal.  Up stepped Graham Ashton, who hit the ball over the Star wall and into the middle of the net; pass the diving Ellis, for Town’s fourth goal of the game.  Once again, poor keeping from Ellis.

All in all, the score line was harsh on Star and didn’t reflect the game.  Tipton are an average team at best, who use a long ball game and home pitch to their advantage.  It will be interesting to see what happens in a couple of weeks time when we play them at Dales Lane in the return league fixture, when I think the result will be a lot different.

Star are in action next Saturday 3rd November when we host Coleshill Town at Dales Lane in the Baker Joiner Midland Alliance KO. 3pm 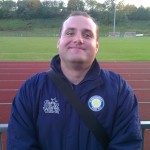