Wes Hughes hands Bobby the match ball, after he scores four goals in the cup; who would have guest that in their next match they would have something else in common? 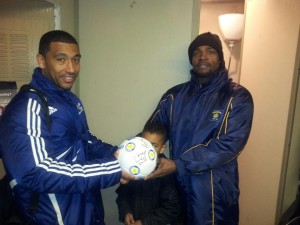 Continental Star Reserves travelled to Atherstone for a much needed win, having only played 3 league games up to date due to cup games.  Our game plan was to keep it tight, eliminate offensive space; an accident on the motorway meant an hour stand still and consequently, had an negative impact on our pre match preparation.

All verbal reasoning went missing as Star allowed Town’s wide player to home in & score from tight angle.  As Star started to dominate possession, Bobby foolishly got himself sent off (JA verbal slang

directed at the ref).  Worse was to come as the defence parted the waves, allowing town to increased their lead; down, but not dead, up popped Relly to reduce the score line.

An end to end game took another twist.  Now Star were reduce to 9 men, Wes Hughes getting a straight red for retaliation after being molested by Town player who felt the need to check his “particulars”.

In over 30 yrs of being associated with Continental Star I have never been more proud of 9 men(+3 subs) battling /showing great inner strength, beyond the call of duty.  Not only did they draw level, but they broke away for Relly to complete a fine hat trick.  9 STARS (+sub) were colossal, gaining a deserved 3 – 2 victory.  Soup taste good right now!