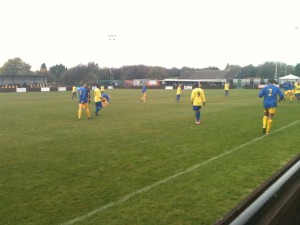 After six weeks on the road Continental welcomed Tividale to Dales Lane in this Midland Football Alliance clash.  Star gave debuts to new signings Richard Gethin in goal and Matt Hunt at centre half.

With nine minutes on the clock Jamie Price saw his shot from the edge of the area sail just over the Tividale crossbar; seven minutes later with Tividale on the ropes and having no answer to Star’s quick, free flowing, attacking football, Ibrahim Benjamin made a superb lung busting run through the Tividale defence only to see his shot scrambled off the line and away for a corner, by Jason Chilton.  The hosts continued to dominate the game and in the thirty second minute a quick Star corner was played out to Tony Green who unleashed a curling shot that crashed against the Tividale bar and was cleared away to safety by the defence.  Then totally against the run of play on thirty five minutes Kyle Hill gave the visitors the lead, neatly volleying the ball from just inside the Star area, through a crowd of players into the bottom left hand corner of the net, wrong footing Gethin in the Star goal.

The second half started in the same fashion as the first half with Star pressing forward playing neat, slick, attacking football in search of the equaliser; a superb close range reaction save by the young debutant, Gethin, in the Star goal prevented Tividale from scoring a second in the sixty-second minute, when Gethin palmed away a Kyle Brady header.  Tividale’s skipper, Richard Taylor spurned another great chance after seventy-five minutes to put the game to bed for the visitors when he was set up by Brady on the edge of the Star area, but saw his shot skim the top of the crossbar.  Star continued to press forward in search of the equaliser, playing their trademark brand of attacking football, forcing Tividale to put ten men behind the ball for the remaining minutes of the match.  However, with the last kick of the game substitute Daniel Holgate flicked the ball into the path of Benjamin, who with the time and space saw his shot go wide of the Tividale post; with that the referee blew the final whistle of a game that Star dominated from start to finish, and should have gone away with a point at the very least, if not all three.

Star travel to Evo Stick southern Premier League side Bedworth United on Tuesday 23rd October, in the first round of the Birmingham Senior Cup; K.O 7.45 pm.