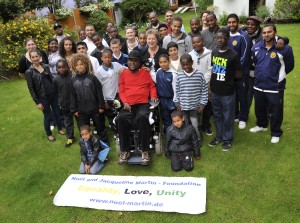 On June 16, 1996, Noel Martin a Jamaican-born British citizen became the victim of a racist attack in the small town of Mahlow in Brandenburg, Germany; an attack that would change his life forever.  Noel was one of approximately 80,000 construction workers from the UK who were working in Germany at the time, when he was chased in his car by two young, right-wing thugs.  They caught up with him and as they passed him at high speed, they threw a rock through his car window causing Noel to lose control of his vehicle and hit a tree.

“Since then he has been paralysed from the neck down.  The perpetrators, sentenced to five and eight years in prison, have finished their terms and live in freedom…” said Lincoln Moses MBE, General Manager of Continental Star FC.  He goes on to say: “…They have never shown any remorse, and Noel Martin has never received an apology.”

Many people would have become bitter, but instead Noel has taken up the challenge of fighting racism and in fact led an anti-racist demonstration in Mahlow in 2001.  During this visit to Germany Noel spoke with the then Ministerial President of Brandenburg, Manfred Stolpe, and initiated a youth exchange scheme for young people from the region of Brandenburg and his home town of Birmingham.  This is where Continental Star FC enter the picture.

Lincoln Moses and Noel Martin were introduced by a mutual friend, former Wolves and QPR player: Bob Hazell, at a charity event.  The two began chatting and it was not long before they realised that they had a common desire to help others.

Several months down the line from that chance meeting between the two men and the symbiotic relationship has seen Continental Star take a group of inner city youths from Birmingham across to Germany as part of the Noel & Jacqueline Martin Foundation; its aim to raise the awareness of racial intolerance and to promote greater harmony.