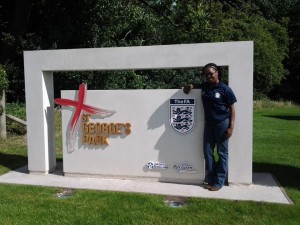 It was just a normal Saturday as I stood there monitoring the youngest group of footballers. When the General Manager for CSFC approached me and stated that The FA wanted to film here at The Hub, Holford Drive for a segment to be placed in their Child Welfare Officer (CWO) training module.  I had led meetings, training sessions, away days and so much more but never have I had my actions filmed as I presented.

I was happy to see the club’s hard worked recognised and the fact that our safeguarding practice was at a level deemed to be an exemplar for others, felt incredible.  Although, I was wasn’t totally confident about being filmed, mainly because at CSFC we work as a family, and we always present ourselves as a group sharing responsibilities as a family should, but this would be me presenting on my own, the end product being for public use.

The General Manager (GM) touted me as the “face of the club’s Child Welfare” and I felt as though the entire presentation and reputation of the club from a child welfare point of view was now on my shoulders and I was solely responsible for how it would be viewed.  I was very fearful of doing the club an injustice and making an error that could jeopardise the future/stability of the club.  I mentioned my concerns to the GM who firstly smiled and said “…that’s why your right for the role because you worry about everything”.  He then proceeded to give me very encouraging examples of how I had previously performed well in my role as CWO and in the end I could not think of any logical reason to decline the opportunity.  So I gave the green light knowing that the CSFC family would always be close by if I needed support.

During the interim I led a child welfare training session with CSFC coaches which bolstered my confidence.  I was then able to meet, Richard Watson, face to face at a FA safeguarding workshop where we agreed the day and time for filming, a day when attendance would be at full capacity across the various age ranges.  Richard was lovely and spoke highly of the club’s reputation.  It was at this point, as he listed the club’s various accomplishment that I realised that everyone involved at the club had played their part in getting us to this juncture; it was now my turn to showcase what we do.

Prior to the scheduled filming we had the parents/guardians of the children complete the consent forms and we kept a few extra copies for on the day.  I had received an email from Richard explaining that they would be filming me and the youths as they took part in their training sessions.  The email also listed some questions that would be asked during the filming; this is when I started to relax.  I love to be prepared for all situations and knowing what kind of questions would be asked, put me at ease.  My preparation was thorough; I referred back to all my CWO books to ensure the information was at the forefront of my mind.  I checked my phone that the contact numbers for welfare issues were up to date.  I even wrote notes, highlighted paragraphs and added sticky notes to my CWO reference books in case my mind blanked during filming.  On reflection I would say I prepared in the same fashion as I would for an exam.  All that was left was to pray for good weather on the day.

The morning of the filming I awoke before the alarm.  I put on my CSFC clothes grabbed my folders and bags and headed out the door.  I noted the grey skies on the way to The Hub and hoped the rain would not settle over us as this would impact on the attendance which in turn could jeopardise the filming.  Upon my arrival at The Hub I was greeted by the GM; his excitement began to fill the air.  The coaches and Saturday members of CSFC began to arrive; this happily reminded me of the family spirit that lives within CSFC.

I met with the photographer and showed him to the meeting room where he could set up his filming.  I think my nerves showed, as I shakily handed them coffee but they were so nice and patient.  I remember mentioning that I had watched ‘The Gadget Show’ the night before to which the lead videographer stated he had also done the filming for the show.  BANG!  That was all it took for us to establish a connection and I was ready to go.

The process began by them asking questions about CSFC: what we do to safeguard children, how we deal with situations and where we go to for support.  I spoke calmly and clearly giving a detailed response for each question.  My confidence grew with each question as I realised all the answers were coming to me easily because I live and think of CSFC so much every day that it is as much a part of me as my shadow is.  I treat each child within the club as if they were my own blood relatives and I always want the best for any child that we engage.  I always like to think that we at CSFC focus on the person and not the player.

Following my interview the videographers went around filming each training session which included our: Mini-movers 3 – 5 yr olds, Development centre 6 – 8 yr olds, Under 10, Under 13 & Under 14 teams.  Those participating were excited as they ran onto the pitch to begin training.  They were not the only keen ones there as an abundance of parents stayed to watch training too.  The GM and junior secretary were also filmed for the module; the day truly was the experience I hoped it would be.

I met with Richard Watson again after the filming and was able to see the filming as a final module.  It looked so great my smile stretched for miles.  The coaches looked professional and so many of the kids were included it was truly another proud moment for Continental Star Family Club.