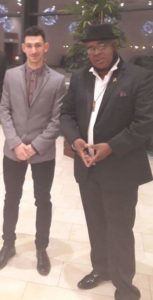 If you have every spent some considerable time with Lincoln Moses, the general manager, of Continental Star FC you will realise that he is passionate about creating opportunities for others within the community.  In fact, Lincoln often refers to the ‘FC’ in Continental Star’s name as meaning ‘family club’ not just because of the number of siblings involved within the club, but primarily due to the strong bonds that are often created by ethos of the club.

Helal Albaarini, a refugee from Syria, is a member of the current 1st team squad who has become a popular member of the Continental Star family.  However, whilst a strong bond has developed between Helal and other members of the club, this bond could never replace the loving, nurturing relationship of a family unit; a point that is always brought into focus during the festive season.

However, this festive season (2016) will be a special one for Helal, as he will be reunited with some of his family members for their first Christmas in Birmingham.

(Click the photo to read Neil Elkes’ article in the Birmingham Mail.)