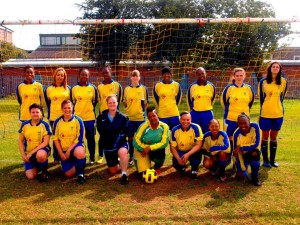 It’s an exciting time right now for Continental Star Ladies!!! Pre-season training commenced in July, and morale is high as we have entered into our third season as an 11 aside team. We’ve already had a great start to the new season winning 3-2 in both of our first two league matches against Studley Women and Netherton United.
The journey to date has been an enjoyable one, with us seeing so much growth and development both individually amongst the players and collectively as a team. Our first season (2009/10) demonstrated that we are a team with great potential and raw talent. Managed by Diane Sawyers, we entered into the Herefordshire and Worcestershire Women’s County League, finishing in the top half of the table, which was a pleasing end to our first year. The ladies worked extremely hard on and off the pitch to develop teamwork, morale and good sportsmanship.
We are sincerely grateful to Diane for her commitment to the team in this formative year. Her dedication and support gave us a great start. Thanks also to Bobby, Paul and Carl who stepped in to support our team, who at the time were without an official coach.
Continental Star Ladies welcomed Nadia Mughal (aka Nadz) at the start of last season (2010/11), as she came to work along side Diane as the team coach. We entered into Division 2 of the Birmingham County Women’s league as newcomers. A third of the way through the season, Continental Star Ladies were showing great promise, having won 5 out of the 6 games played with a goal average of almost 6 goals per game! Then we met our match with Stourbridge ladies and after fighting long and hard, we lost 4-2 to the unbeaten team. With two losses, this left us in 2nd position. The pressure was on, with us now needing to win all of our matches to finish in 2nd position and be promoted into Division 1 for the following season.
Unfortunately our team suffered a number of reoccurring injuries amongst other obstacles and so the challenge became increasingly difficult, but our ladies continued to fight until the very last match. The final result: Continental Star Ladies finished 3rd in the league. Not where we hoped to finish but still, yet another promising season. However the good news is that Continental Star ladies were still promoted into Division 1 as Stourbridge ladies’ moved to another League.
Having completed our debut year in the Birmingham County Women’s league, there is a sense of confidence about the potential for our team to develop further and to achieve greater things. The team is maturing and growing, with so many players showing a great dedication and commitment to the team. There is a great drive to iron out and learn from past challenges, to set new cultures, and to develop our skill level as we strive for excellence.
Continental Star ladies has greatly appreciated the flexibility and admirable attitudes that some players have shown with playing in positions outside of their choice to benefit the team as a whole. This kind of positive attitude and dedication towards the team has helped us to get to where we are now. In particular, I would like to give a special mention to Kimberly Tsiga as a sign of gratitude for being one of these dedicated players, playing completely out of position for the majority of the last season, from striker to goalkeeper.
Sadly we said goodbye to Diane Sawyers as Manager of Continental Star Ladies at the end of the 2010/2011 season. She managed us for the first two seasons as an 11 aside squad and for a number of seasons with the 5 aside teams. It is only right to acknowledge and show gratitude to Diane for her invaluable support, hard work and commitment to the team. We wouldn’t be where we are without you so thank you for all you have done. Equally we would like to officially welcome Nadia Mughal as the new manager and head coach for Continental Star ladies. We appreciate the vision that you have for the team and look forward to all that you will continue to bring to the team.
Well that’s all for now, but keep on the look out for Continental Star Ladies updates, fixtures, results and player profiles, coming soon J
Yours in sport,
Candice Francis