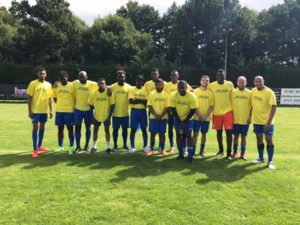 Star get off the mark with a win away to AFC Solihull.  Two goals either side of the half by Davion Hamilton was enough to secure the points, after the home side was awarded a dubious equalizing goal, after it appeared that the ball had entered the goal directly from a throw-in. Star lifted their game and created several chances as both teams went for the win. However it was Davion who struck the winner with an effort from 25 yards out that flew pass the hapless keeper.