On the back of two opening game defeats, Continental Star 1st team took the short trip to Boldmere St Michaels looking to gain their 1st win of the season.
The sun was shining and the Boldmere ground staff had done a great job preparing the playing surface.
So to kick off.
Game started at a decent pace with both sides having a fair amount of possession, but only managing to create half chances.
On 30 mins Boldmere created another half chance on the edge of the stars box and took an early shot. Hunter seemed to lose the flight of the ball, but still managed to turn it away for a corner. (These new balls move all over the place)
The game continued to ebb and flow until the 35 min when Holgate produced a great turn on the outside edge of the Boldmere box, as the ball bounced up he took it early (with what looked to be the outside of the boot from where I was) and lobbed the keeper with a sublime finish
1-0 Stars
Boldmere looked rattled, but still continued to create half chances and on 40 mins with a long ball over the top of the defence, the Boldmere striker went down in the box under a challenge from Robinson. Whistle in his mouth and finger pointing to the spot the ref awarded a penalty.
After saving a penalty on the opening day of the season, Hunter always seems confident when faced 1on 1 from 12 yards and he didn’t disappoint this time. The ball was well struck by the boldmere player to Hunters right hand side, but a brilliant save kept the score at 1-0
HT
A change of ends, but similar pattern to the start of the 2nd half with both sides enjoying possession and creating chances. Again, another long ball over the star defence on 65mins found the Boldmere strikers feet, he had a decent touch and slotted it past the advancing Hunter to level the game.
Undeterred, Star continued to play football and swiftly regained the lead on 68 mins when substitute Cobourne drilled the ball into the bottom corner to put Star 2-1 up.
By now Stars were looking comfortable, pulling Boldmere around the pitch with some great football and creating some decent chances, most notably when Stardom made himself a little space out on the left hand side of the box and whipped in a vicious curling shot (keeper rooted) which hit the foot of the post and bounced away.
Stardom again had another chance, he tried to lob the keeper, keeper made a save and the ball fell to Cobourne who hit a first time volley which narrowly went wide of the Boldmere goal. Star were looking comfortable and managed to contain Boldmere to half chances and long balls whilst still creating chances. Two of which fell to Cobourne, but Boldmeres Keeper produced two decent saves to keep his side in the game.
With 90 mins gone Boldmere were throwing men forward and won themselves a corner. With a nice, pacey delivery into the box, Boldmere player Lyng rose above the Star defence to power the header home and deny Star what seemed like their first win of the season.
2-2
More misery was yet to come, on 94 mins Boldmere player Swain found himself on the edge of the Star box, with a melee of players in front of him, he took a pot shot at the Star goal which was headed nowhere until it took a cruel deflection off Green which sent Hunter scrambling to his left hand side. At full stretch, Hunter could only get fingertips to the ball, not enough to keep to keep the ball out.
3-2 Boldmere
Star were cruelly denied 3 points in a game which seemed to be (and probably should have) gave them their 1st win of the season.
Plenty of positives to take and lessons to be learnt.

Apologies if I missed anything, didn’t know I’d be doing the write up. 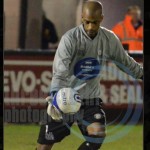